RootsWeb.com was one of the most invaluable sites during the early days of the internet, so much so, this grassroots effort to present and preserve genealogical information and society collections is back online…sort of.

In 2000, RootsWeb was purchased by Ancestry.com, causing many, including myself, to be wary of its future. Still, we like to believe that the commercial site, not associated directly with the LDS Church today, is trustworthy as we pay hundreds of dollars a year for access to their records, trees, and DNA. When a security hack brought down the site in December 2017, we felt that the power and vast resources of Ancestry would be able to restore the free sites and data quickly.

This past week it was announced that RootsWeb is back up and working, again, sort of. Mostly. Checking the calendar. End of August. Eight months later.

We can speculate on why it took so long…old servers, old tech, developers with little backwards compatibility expertise, the volume of data to repair, the damage done by the hack…but it is now up and it is time to ensure the information you need for your research, or your society’s data, is backed up and protected, and other strategies considered such as copying the information to another site under your control.

In the 1990s, I began to use RootsWeb to find genealogical societies with information about my personal research. They were beginning to share their databases, indexing projects, history, and record information via the wiki and society hosted free web pages. No longer did I need to pick up the phone, write letters, or get on a plane to find the information I needed to continue my research. There was still some of that, but those efforts were streamlined and made more efficient because of the online information.

From large genealogical societies to tiny family history groups, RootsWeb was an equal access platform to share information. Run mostly by volunteers, it became a passion for many, a frustration for just as many, I’m sure. Larger, more financially stable groups went on to create their own full-fledged sites, but others had a place to reach out to those seeking birth and death records in Shawano County, Wisconsin, or Raisin, Michigan. International family history groups and associations added to the wealth of information over time, and it soon became a first stop on your family history hunt.

As with all things online, the shuffle from owner to owner, host to host, and the ever-changing hands of control from the highest administration to the smallest web page manager took its toll. By the 2010s, there were calls to close RootsWeb or at least make changes to improve the quality of the material, or preserve it and walk away. I heard many rumors, opinions, suggestions, and assumptions over the years, but it kept hanging in there, and I kept reaping the rewards.

Today, it is back up and running. Groups around the world with information on their service should rush to check it, and update it if they can. And back it up.

This is what I’m going to do now that RootsWeb is back up.

How to Preserve Your Research Data on RootsWeb

While it is true that we can use the Wayback Machine to access many of the web pages found within RootsWeb dating back years, I found that some of the pages I relied upon for my research were hard to find through the Wayback Machine.

Here are a couple alternatives.

I’m going to do a combination of both to ensure I have today the information I’ve used in the past and may in the future…just in case.

I hate “just in case” issues, but that’s the world we live in. If we learn anything from the RootsWeb experience, let it be to save our research to keep it under our control for those just in case moments. 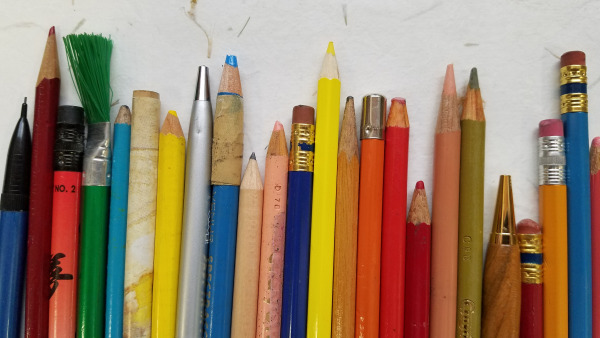 One of my students asked me to define technology. After a few moments of thought, I held up a pencil.

I teach web technologies for web publishing, design, and development. I specialize in WordPress, blogging, and social media. I’m a techno junkie of the highest order. My students wish to follow my path, but I’m already several decades ahead of them. To her, a pencil was “old school,” not like computers and driver-less cars run by computers.

“Before the pencil, humans carved words in stone, wood, plants. They used ink on quills of feather, metal, and wood. It was hard work and messy. The pencil, and the pen, revolutionized the world. It gave people a way to communicate and preserve their thoughts and ideas more efficiently. It democratized knowledge.” She stared at me. She should have known the answer to the question would come with a history lesson. “The pen and pencil allowed anyone, no matter their class, income level, or education level, to write. It brought literacy to the world.”

“But it’s not technology.”

“What’s your definition of technology then?”

“Machines that improve our life.”

“That’s right, but be more specific. The definition of technology is anything that improves our way of life. It could be the pen and pencil, the wheel, the dishwasher, the computer, or the space flight.”

As I work on this site, I keep hearing her voice in my head. “But it’s not technology.”

The goal of this site is to talk about technology for the modern genealogist. Sometimes I feel like I should defend myself when I offer tips and techniques for genealogical research that involves pen, pencil, and paper, with no computerized gadgets or bells and whistles to impress. Yet these are technology. So are the gadgets. They all improve not only our way of life but our family history research.

Recently, Archeology Magazine reported on research by Washington State University on the inequality of human societies. They studied the economy between 9000 BC and AD 1500 to measure the disparity of the income gap between rich and poor. They found that economic division grew as society became more technological. As people became more industrious, turning beasts into instruments of agriculture, allowing farmers to increase the area of land they cultivated for food, thus increased food production. The agricultural industry developed, feeding people beyond what a person could grow themselves. Before, if you wanted to survive, you did it yourself. Everyone was basically equal. Technology, even the use of animals, changed lives, improving it for some, but not always all.

I will never forget the day when my father announced that his shipyard engineering staff were about to receive their first computers. They would finally be able to work on their drawings and plans on their computers. Like a kid, he was so excited. We had a Commodore computer which everyone shared (5 kids and two adults), but this was a “real” computer. It promised easier working conditions, project management, and faster production times.

A couple months later, he came home tired, frustrated, and cussing up a storm. The computers were finally installed at work. They were so excited, watching the workers carry in the monitors and CPU units, fiddling with all the wiring. The activity was fascinating and the prospects promised of improved work conditions delightful, until they learned the price of the new technology. The memo arrived just after lunch. Their secretaries were going to be laid off. They were no longer needed. They’d been replaced by the computers.

For my father, it was the end of his world. He hadn’t quite figured out the computer process or system and relied upon the secretaries to help him out. And he was semi-illiterate. He could read, but he couldn’t type and couldn’t spell. Getting a handwritten letter from your own father with your name misspelled is an eye-opening experience in this age of literacy. I didn’t realize until then how much effort he’d put into concealing it. The secret was at risk. The computer brought great opportunities to his work life, but years of relying so heavily upon the secretaries to cover for him gave him nightmares.

I did my best to teaching him how to type, sitting with him for hours at our home computer, teaching him the basics. I became the teacher of the family at a very young age, embracing modern technology quickly, taking everything apart and putting it back together (successfully) even then, then showing others how to do the same. He struggled, and managed to hold onto his job for quite a while, until the ship building industry couldn’t hold its own in Seattle.

Secretaries were a form of technology because they improved the quality of life and work for busy employees. Today, computers have replaced them, and secretaries went on into new jobs, embracing new technologies or being hired as personal assistants, same job, new name. The computer is today’s pencil.

As I drive down the past lane, my focus will be on technology in all its forms as related to family history. It could be the pencil. It is likely the computer, printer, and scanner. It is about the web and online access to records and research techniques never before so readily accessible. It will be about the techniques in modern genealogical research, including online databases and archives, educational opportunities, and ways to preserve that research, and your family’s history.

As we share the journey, remember the pencil. Sometimes it’s the smallest of things that changes not only our lives but the world. And we must adapt.

Follow Lorelle in the Past Lane on WordPress.com
Join 7 other subscribers

Lorelle on the Web